We will show how to set USART in order to allow communication between PIC to PIC or between PIC to a personal computer. We will start with the definition of media concepts. There are two options to differentiate when speaking about transmission of information on the transmission lines:

When using the serial communication we transmit the multi-bit word bit after bit (when at any given moment only one bit will pass).

When using the parallel communication, however, the number of bits will be transmitted at once from one computer to the second computer. 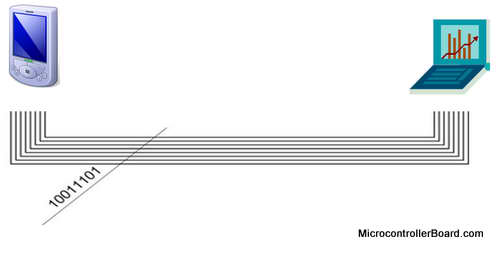 When using the synchronous communication  the information is transmitted from the transmitter to the receiver:

This type of communication is faster compare to the asynchronous communication since it is "constantly transmitting the information, with no stops.

In this case, the information is divided into frames, in the size of byte. Each one of the frame has:

Frames of information must not necessarily be transmitted at equal time space, since they are independent of the clock.

To communicate with external components such as computers or microcontrollers, the PIC micro uses a component called USART - Universal Synchronous Asynchronous Receiver Transmitter. This component can be configured as:

To enable the serial communication with PIC micro we must set different parameters within two registers: (click the links for the explanation of each bit)

An example of 8-bit transmission:

Now, lets define the receiver side to receive 8 bit information. To do so, the register RX9 will be zero (RX9=0). The received information will be stored in the RSR register, which acts as a temporary buffer storage.

An example of 9-bit transmission:

Suppose we want to transmit the following information: 110010110. This information is in the size of 9-bit, so there is not enough space to store all the information in the TXREG register . Thus, we will store the low 8-bit in the register TXREG and the MSB in the TX9D bit.

We will set the TX9 = 1 - enabling transmission of 9-bit data. It is important to note, that first we need to store the 9th bit and only later other 8-bits. This is important because the information of 8 bits may be transmitted immediately once being inside the TXREG register. As a result the transmitted information will be incorrect.

The information before the transmission will look like this:

Now lets continue the explanation. Each transmission is transmitted in the particular rate (BAUD). The baud rate is measured in units of bps (bit per second) or kbps (kilo bit per second ).

Calculating the value being placed in the SPBRG register

The size of SPBRG register is 8-bit. As discussed previously, in asynchronous mode, the baud rate of transmission of the information can be set to high speed or to low speed. The rate selection, as already seen, is made by the BRGH bit in TXSTA register:

For each baud rate we need to calculate the value being placed in the SPBRG differently:

The following outlines how the value which is placed in the SPBRG register is being computed, in the case of a high baud rate and low baud rate.

Because it is not possible to write a number with a decimal point to the register, we take only the whole part of the number and place inside the register SPBRG = 51.
The following tables are the BAUD RATES FOR ASYNCHRONOUS MODE BRGH=0 and BRGH=1. 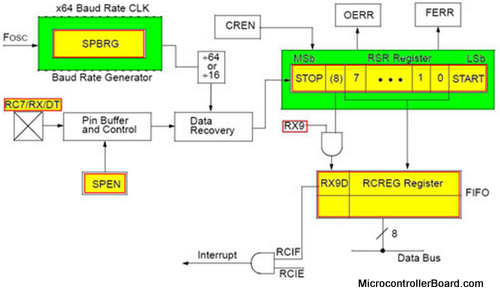 According to the USART TRANSMIT / RECEIVE BLOCK DIAGRAM, that the information that was transmitted via pin RC6 in Port C, is received through the pin RC7 in Port C

Therefore, in order to transmit to a computer we have to add another component, which will allow the transmission in the RS232 protocol and convert between the levels of voltage of the USART to the RS232. The USART logical signal levels are from 0 to 5 volt. However, in the case of RS232 we will need to different levels of voltage.

CLICK here for a detailed explanation about the RS232 protocol. 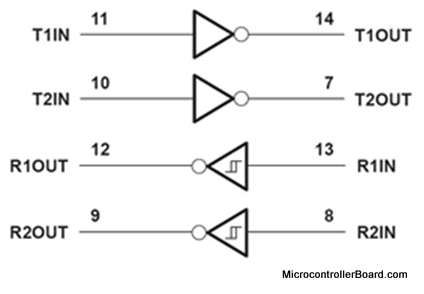 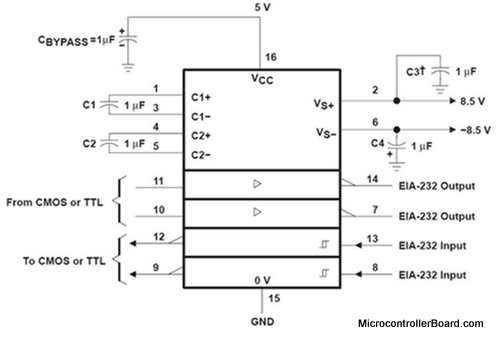 Explanation of the connections:

The information that is transmitted from the computer connects to the pin 8 or 13 of the device. Here again there is conversion levels, but the opposite way, which will apply to USART. Converted signals are outputs through pin 9 or 12.

In addition, the program will turn on the appropriate LEDs based on the information received. The information starts from number 0 and grows each time by 1. As stated previously, the information is transmitted through pin RC6 and received through pin RC7. Thus, in order to use one EduPIC microcontroller board we need to short the pins RC6 and RC7. We will use a jumper to do so. You can see the connection in the picture below: 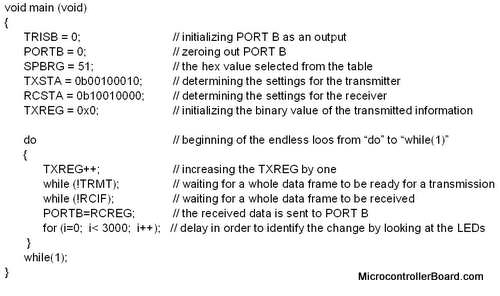 Back to PIC microcontroller tutorial

Back to PIC programmer